We may look at human beings as at just one of a kind of “organic tubes” which are dwelling on the planet, picking up food at one end and discharging the left-overs at the other end. In the process the tubes work out and eventually die. So, for the whole game to go on, the tubes developed an elaborate system of reproducing themselves.

At a certain stage of evolution some kinds of tubes (inc. human beings) got infected by something which was later called curiosity and creativity. Those two diseases cost quite a lot in an additional amount of food needed, so some tubes decided to get rid of the unwanted complication or to put those on a hard diet. People were either lazy or fortunate to keep the diseases – and now those two are among the main characteristics distinguishing us from the rest of the organisms on the Earth – causing problems to all the neighborhood and boosting our satisfaction.

Creativity and curiosity are than deep inside us as integral and in many respects guiding part. It is remarkable and astonishing how little we now about those and how superficial is the knowledge. 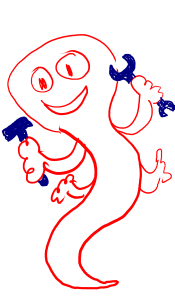 This entry was posted in Look around. Bookmark the permalink.