Ideality as the main law of development of (technical) systems: is Google Glass a mainstream or a failure?

UPD: please participate the poll (at the bottom of the side bar) – with thousands of views of this article, there are only 20+ voters to the poll, how come?!

Yet another example: which truck has better ideality ratio – A, B or C? 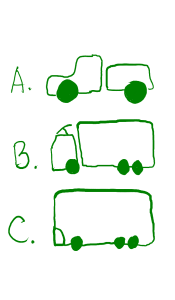 Think about it for some time. What is the main function of a truck? It is easy with trucks, isn’t it? – The main function is to transport goods along the roads. Which truck is better? The one which (in our yet again simplified example) has bigger body (main function) compared to the whole truck (main function plus all other functions – engine, fuel tank, transmission, cabin etc.)

Look at the picture below. Truck A is more or less what we saw back in 1930-1940s: relatively small body compared to the size of the cabin and engine compartment. Main reason for it – ineffective engines, incapable of carrying much more than they weight themselves. There were other reasons, of course: e.g. lower quality of roads (but meanwhile let’s disregard those in our simplified example).

Truck C may be an example of what is next. If function of control and driving would be given to the higher level system (computers, checking cables behind/along the road or/and cameras instead of human eyes), there might be no need in permanent driver and permanent cabin – some small cabin might be needed for short distance (inside a mill) or “a last mile” transportation – that’s all. One by one, control, energy source, engine and transmission might be relocated to the higher level system – leaving only the body to the truck itself. 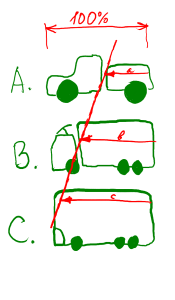 Would the ideality level be higher in the case C? Of course. Would it be 100%? Of course not – higher level system counts as well but it weights less than one driver per truck (c > b on the picture above).

Let’s have a look at cell phones: main function is to enable voice communication and main elements – speakers and microphones. All the rest is just auxiliary (read: unnecessarily) functions. Do you agree? Well, you have all the reasons not to. Because Ideality Law is not always as straight forward as it was with trucks.

From phone to Glass

Any system develops towards minimisation: less system, more function. E.g. less truck (relative to) more load. Some systems reach their limit sooner or later: they cannot be “less” in order to be useful. One of such examples are cell phones. Minimisation reached its limit with phones the size of a match box (do you remember phones like this?) – those were definite failure, one only could either listen or talk, moving the phone from ear to mouth accordingly. What next? You cannot stop, that’s for sure.

Ideality dictates the system to increase number of useful functions as a way to increase overall ideality rate (as another way of “more good with the same cost”). Cell phones went this way: entertainment became additional main function and the screen became a new (additional) main element. The development was exactly as we’ve seen it for the trucks: 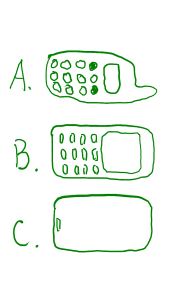 There was a visible contradiction in the development from B to C – the keyboard was becoming smaller and smaller, until it was very hard to use it properly. It was obvious keyboard will jump into the screen – to be comfortably big when there is a need in it and to become virtually non-existent when there is no need. Back some 10-12 years ago I told on my trainings that cell phones will have no physical keyboard soon (there were skeptical faces, not for long). What now? How the point D is going to look like? Is the Google Glass a potential point D?

In example, big company may have several rep offices with key departments throughout the globe while most auxiliary functions are kept at the head office level. This structure is lean and it is closer to ideality. Why do we have medium and small companies in the market as well (fortunately)? Because in big organisations there are other forces at work either – making them fat and slow (but it is totally different topic).

As phones became mini-computers, the law dictates there is a strong tendency (in the long run) to push more and more functions to the higher level system – up to all the functions but those directly interacting with the phone owner, meaning visualisation (sound, taste – whatever) and receiving of commands. Time control, calendar and all the data, computing capacity and software – all this may migrate some day to the higher level: e.g. to stationary computers throughout the network.

The Google Glass is one more step closer to the user. And it is opening the gate of further minimisation and migration to the higher level. Will the Glass be the last point? Unlikely. There is a possibility to get even closer to the customer – to get under his/her skin. Literally.

In more details, the pattern of development of (technical) systems are presented on the picture below (canonical version you may find on www.altshuller.ru, I give my view of how the patterns work):

When system appears (and by system here we understand a certain way of performing certain function – e.g. writing by leaving a trace of ink on a paper), it tends to push human out of the auxiliary functions (holding/measuring the ink, protecting the main element etc.). So there is a push 1. from the main element to the right – the system grows from barely working to independent and reliable.

Later development goes either by 2. pushing elements from the right to the left to the higher level system or 3. pushing all auxiliary elements/functions folded into the main element, or both. If none of those works, there is one more way – 4. increase in number of useful functions.

Above was my attempt to build an easy to grasp picture of what the patterns are and how they work. Your feedback is very welcome on new@ideas4.biz.

This entry was posted in TRIZ. Bookmark the permalink.