Imagination and creativity VS age 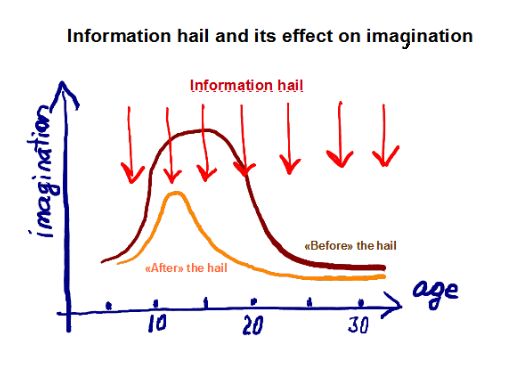 The logic is simple: if you have too much info rushing on you all the time from all directions with almost no interruption (when was the last time you sat on your toilet pan with no phone, tablet or computer in hands?) you have no time to imagine, to play with the info.

It was suggested that back in 1950s-1980s the peak of imagination activity/capacity was at some 15 years age (I have not seen any scientific papers on it – might be incorrect) and now it is down to some 11-12 years and the activity is lower – have a look at an illustration above. Once again: no idea if it is true, and no idea how the imagination/creativity was actually measured. It might be even the case (depending on how you measure) that creativity would grow, at least in some countries (generally beter life conditions and info hail instead on dry period). Would be happy to hear more on this.

One of my friends used to go to far-away village at least for couple of weeks every year – to get some quiet time and “to think about what he really wants to think about”. Seems to be the only way nowadays :). Villages out of internet coverage are still pretty abundant in Russia so there is still hope…

Isn’t that ironic that the “idle” time is in shortage – after all the machinery to save time?

This entry was posted in Look around. Bookmark the permalink.