Quite frequent question recently: do lean management projects lead to personnel cuts? And the short answer should be “No”, while a bit longer answer might be “…Sometimes”. Let’s have a closer look at those sometimes.

As a starting point, it is important to understand that personnel cuts are never a goal of lean projects. But as a side effect cuts are possible. And most of such situations fall into one of the following categories:

Fat cows are organisations with oversized support functions, inefficient elements performing the main functions and unclear links between most of the elements. Fat cows do not appear out of nowhere, they are a logical step in development of organisations from a “lone ranger” (one-man show, all functions including strategy, production, sales and support are performed by one individual) to a “platoon” (competitive edge is achieved by increasing specialisation and decreasing weight of support functions – see the picture below). Platoons are – theoretically – the most efficient organisations in almost every conceivable sphere. However, sooner or later their success becomes their doom – they gain fat and become “fat cows” (easy life for a long time opens doors for inefficiency).

It is not necessarily a bad thing – fat cows make it possible for new lone rangers to appear and to be competitive. And it makes the cycle go on, renewing the competitive landscape from time to time. 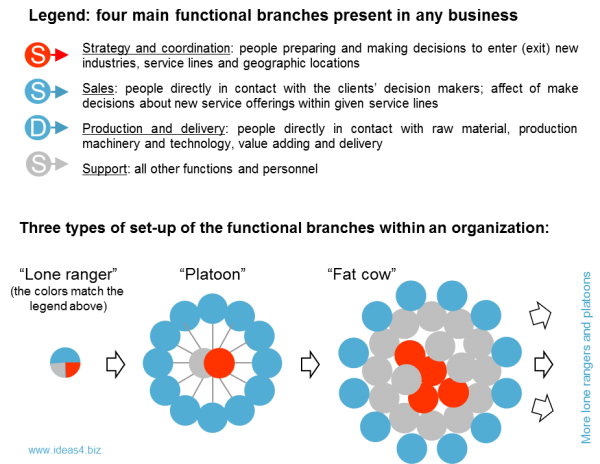 Lean projects for “fat cows” might sometimes be initiated from the fatty support levels (“let those consultants work, and we will be safe and gratified as we were wise enough to hire them…”). But as (and if) lean project gain early successes in production and sales departments, the pressure to apply the same approach to other departments grows. And the inefficiency of the fattest ones becomes apparent. Extreme cases involve large outsourcing – and thus, personnel cuts.

The second group is synchronization, and it is simpler to describe: in an extreme case there might be significant imbalance between different (production process) steps, e.g. for step 2 to operate at 100% efficiency the step 1 and step 3 should work at 70% of their maximum efficiency. The balancing might be reached e.g. by cutting one of three shifts for steps 1 and 3 – with consequential cut in number of personnel.

This entry was posted in Big picture, Lean. Bookmark the permalink.